How to read the Tarot with the Celtic Cross method

In the Celtic Cross, every card has a precise meaning depending on its position, and therefore it must be read, without too much distortion, according to this.

For this Tarot reading method, you can use either just the 22 cards of the Major Arcana, or the entire Tarot deck. It is merely a matter of preference, and everyone can choose as they see fit.

The reader then shuffles the cards, hands the deck to the querent, and asks him/her to cut it.

After putting the deck back together, the reader starts to spread out the cards as shown in the following picture (I suggest laying down cards 1 to 6 face up from the start, while all the others are initially left face down). 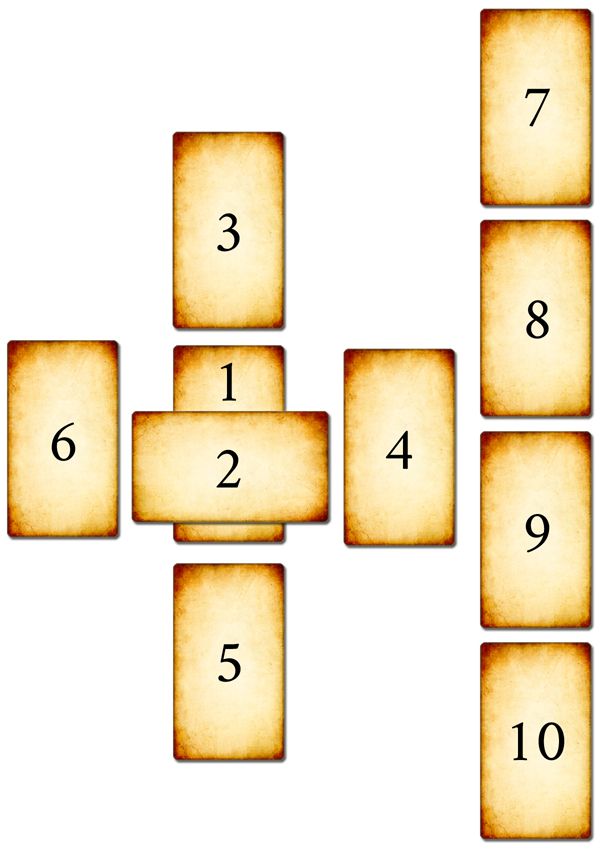 If the reader is immediately struck by some particular interpretations, they can already start explaining what they see. Otherwise they will continue by turning over the cards that are still face down, gradually choosing those in the position they deem the most appropriate.

Meaning of the cards depending on their position

Because it is so intuitive, because of its guided structure (each card has a precise shade of meaning according to its position), the number of cards used, its aesthetic attractiveness on the table, and last but not least because of its mysterious and intriguing name, this reading method is ideal for readers who are approaching the Tarot and progressing in their knowledge of the Tarot.

For the same reasons, it is the method that I recommend when you have to read the Tarot for that specific type of person who needs to understand how things work. This method gives them clear indications as to why you are telling them a particular thing. For example, you could explain to them that the leftmost card represents their past, and that is why you are telling them a particular thing, perhaps pointing out the symbols on the card that refer to what you are saying to them. This will satisfy their thirst to “understand how it works”.

Reasons why it is popular

The Celtic Cross method is perhaps the best-known and most widely used Tarot reading method, online and offline.

I have never thought about the reasons for this, and have always simply accepted the fact.

However, I have recently been asking myself what the reasons behind its huge success might be. In my opinion, the reasons are: