How to read the Tarot with the collective unconscious method

According to the famous psychologist Carl Gustav Jung – founder of analytical psychology – there is a collective unconscious, shared by all human beings and derived from their common ancestors, composed of so-called archetypes – types of images that embody primordial thoughts, which we find in all cultures.

In short, there is a series of images and symbols common to the various human cultures, that no longer need to be explained, that stimulate powerful reactions in us, and that are now extremely rooted in our culture and our minds, in a sort of collective unconscious.

Jung himself speaks of Tarot cards as excellent archetypes; that is, as constituent elements of the collective unconscious.

During this Tarot reading, the reader will show the querent all the Tarot cards, and will monitor the reactions that they trigger in him/her. Will the querent pay particular attention by focusing on certain cards? Will he/she be disturbed by some of them? Or will he/she be intrigued by others?

This Tarot reading is recommended when the querent (the person who wants answers from the Tarot) plays a decisive role in the situation for which he or she is consulting the Tarot.

Especially when the answers he/she is looking for could be partly hidden inside him/her, or might in any case depend on his/her behavior. Or when the querent may in fact already know the answer deep down inside, and just needs to realize it.

A typical case is when a person wants to know if his or her loved one is the right person for him or her.

In this case, it is clear that the querent will play a clearly defined role in a successful outcome. It is also clear that, on a subconscious level, the querent has probably already seen clear signs of compatibility, as well as signs of possible stumbling blocks. He/she may have put them to one side, however, not realizing their importance or significance, or he/she may “ignore” them because they do match what he/she really wants.

In short, this Tarot reading method is ideal for drawing out answers that we might already have within us, and for revealing what we already know, but only on an unconscious level.

Initial spread of the Tarot cards

In this Tarot reading method, you will only use the 22 cards of the Major Arcana.

The querent is sitting in front of you, and has just formulated his/her question.

The reader then shuffles the cards, and when they deem it appropriate, they start turning them over one by one in front of the querent, straight and legible for the querent so that he/she can see them.

The reader continues like this, turning over one card at a time, placing them on the table in front of the querent, one next to the other, gradually without any hurry.

The cards are usually laid out in three lines, so that they do not become too long. This will result in three rows of cards, 2 with 7 cards and one with 8 cards.

Very important: the speed of this operation is the key. The reader must give the querent time to look at the cards, and to “react” to them. Speed must therefore be variable.

The reader picks up the cards that were previously arranged on the table, one at a time, keeping an eye on which cards attract the querent’s attention the most.

Once all the cards are collected, they shuffle them, and hand the deck to the querent, asking him/her to cut the deck into two halves.

After that, the reader asks the querent to pick one of the two halves and hand it back to them.

The reader receives the chosen set of cards from the querent, places it on the table in front of them, and proceeds to remove the other half of the deck – the one that was not chosen (again with slow movements, in accordance with the procedure).

The reader then begins the actual reading, gradually turning over the cards from the half of the deck chosen by the querent.

Layout of the cards

The cards are arranged gradually in a sort of pyramid.

1 card on the first line.

2 cards on the second line, partly overlapping the bottom corners of the card on the first line, and so on. 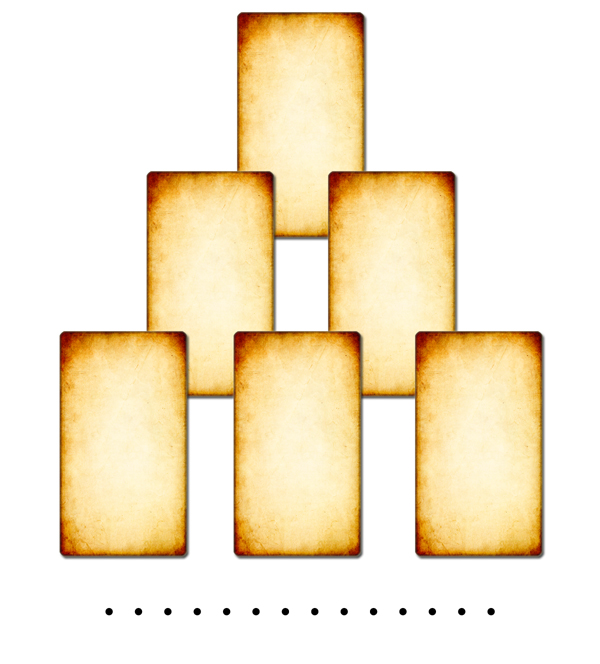 Here it is up to the skill of the reader.

A myriad of observations can be made during such a reading, but my advice is not to perform a “complete” reading of all possible aspects – instead, start with the cards for which the querent showed a particular interest or connection during the initial spread.

For example, in the above image, if the querent had shown interest in the Tower card during the initial spread, the reader would start by explaining its general meaning and, more importantly, its meaning in relation to the question that has been asked. They would then continue by expanding its description and connecting it to the meaning of the adjacent cards, in this case the Popess, Temperance, and the Lovers.