How to read the Tarot with the Star of David method

The Star of David (a perfectly symmetrical 6-pointed star created by the intersection of two equilateral triangles) is one of the symbols most treasured by esotericists through the ages.

Its use and meanings go far beyond Tarot and divination. Just consider that – among other things – it is the symbol of an entire people: the Jewish people.

Esotericism and Freemasonry, are also historically linked by a double thread, and it is almost superfluous to note the importance of the triangle – of the pyramid (also upside down) – in Freemasonry.

The star of David – composed of one triangle pointing upwards and another triangle pointing downwards – is therefore the apotheosis of esoteric symbolism, so much so that leafing through the books of the early esotericists you will literally run into it within a few pages.

To understand (and especially to memorize) how to read the Tarot with the Star of David method, it is worthwhile knowing one of the legends behind this symbol.

The star of David is created by the conjunction of two triangles.

The first triangle represents the water element (female). It points downwards, as water tends to flow downwards to fill spaces.

Legend has it that when God cast Adam and Eve out of their earthly paradise, he condemned them by eternal decree to have to rely on each other for their very existence, thus binding them together inextricably.

From this indissoluble union of male and female, the Star of David was born, which we will use to read the Tarot.

For the Star of David method, you can use the full Tarot deck, or the 22 Major Arcana cards. The choice is yours.

The reader shuffles the cards, hands the deck to the querent, and asks him or her to cut it.

Once the deck has been reassembled, the reader starts to turn over the cards on the table. To do this, they start by laying out the cards of the female triangle, i.e. the one pointing downwards (cards 1 to 3).

Next they will form the male triangle, pointing upwards (cards 4 to 6).

Lastly, they will position the middle card (7). 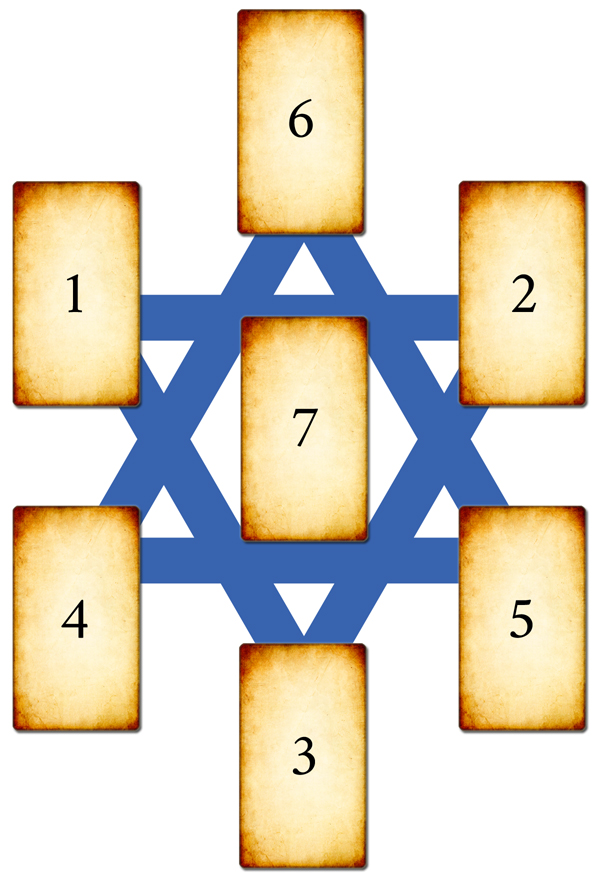 Each card has specific nuances and a context of specific meaning depending on its position, which I will outline below.

Meaning of the cards in the Star of David method